It’s a day in April, but it’s not just any day. The USS Angeles has traveled back in time to see a joust.

We’re at the Renaissance Pleasure Faire in a Los Angeles suburb, where knights are fighting while Queen Elizabeth watches. If you look at the grandstands, you’ll see and hear an enthusiastic group, yelling for their favorite knight.

That’s just a typical day for the USS Angeles and her crew.

You’ll find us at a “Star Trek” convention in Las Vegas, a Science Center in Los Angeles, the Air and Space Museum in San Diego, or a “Doctor Who” convention near Los Angeles International Airport. In fall of 2010, we even volunteered at the Hollywood Xpo convention in Universal City. We’re a versatile group who enjoys exploring the unknown and meeting new friends along the way.

Originally inspired by “Star Trek”, the USS Angeles is a science fiction and fantasy fan club that embraces anything from Capt. Kirk to Harry Potter. We regularly beam down to Los Angeles-area locations filmed for “Star Trek.” But you’ll also find us gathering for parties, going to Disneyland, seeing sci-fi movies, visiting the Jet Propulsion Laboratory in Pasadena, and the Griffith Observatory in Los Angeles. We’ve even been to the Magic Castle in Hollywood, a place we plan to revisit in 2011.

We’re also dedicated to making the world a better place. To understand further, let’s beam down for a moment to Afghanistan, where U.S. soldiers have received care packages from USS Angeles members. Back in California, we’ve raising money at AIDS Walk Los Angeles and at the Bakersfield’s Bowl-a-thon to help the Jamison Children’s Center. We’ve even assisted other organizations as well, such as the American Cancer Society, Toys for Tots, and a program that provides blankets for children in need.

That’s just an example of how our community service is actually global service and because of our efforts to embrace the ideals of “Star Trek” creator Gene Roddenberry, we’re doing our part to meet his vision of a better world.

To see what we do, check out our photos in the media section.

Better yet, come aboard our ship by clicking the “Join Us” link above.

Finally, if you have any questions, please contact me at dave@ussangeles.org .

As of June 15th, State wide California has removed mandator COVID Restrictions.   Command Staff is planning to resume in person activities starting in September 2021.  More  information will be added to the site and the Club Chat Email. 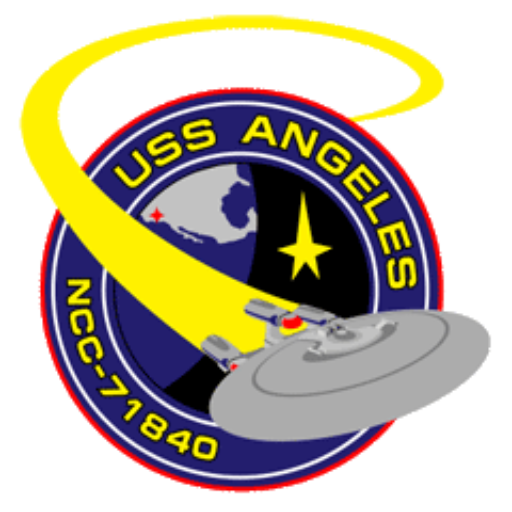 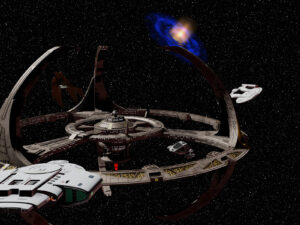 Deep Space Nine  the USS-Defiant and also a Unknown Akira Class Starship in the Bajor Sector.